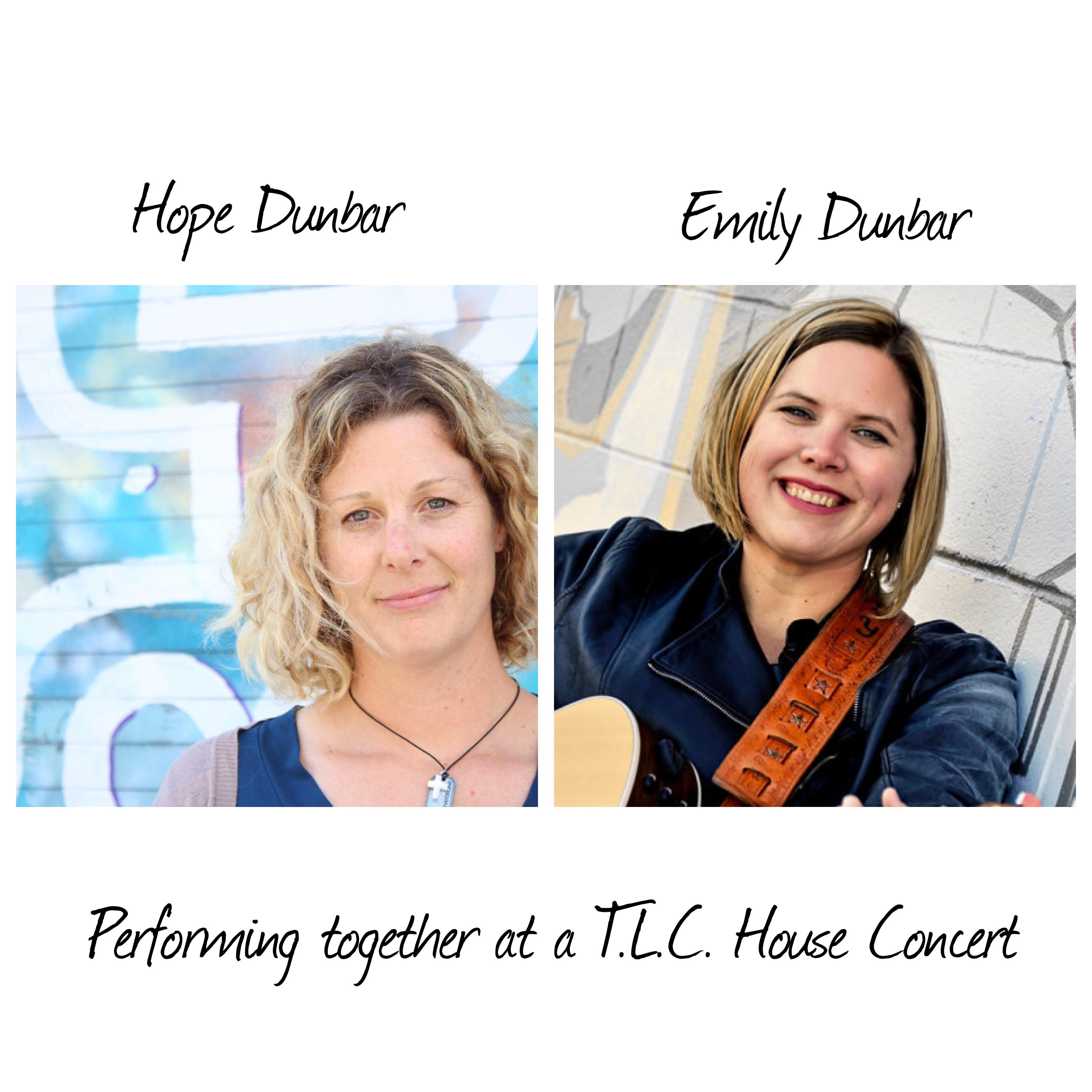 ****This Event is Canceled. Hope is not able to travel back from New Jersey! Hopefully we'll be able to get her back soon! See you in January.***

In partnership with BeNt Shadows House Conterts & Cindy McClellan, we are hosting a house concert at The Leadership Center featuring the ever talented Hope Dunbar & Emily Dunbar.

Starting at 6/6:30-ish, we'll be offering homemade dinner prepared by The Leadership Center team of $10. We are having a baked potato bar. We'll have both baked potatoes & sweet potatoes and all kinds of toppings for meat & plant eaters...along with gluten free! You will also get a beverages. So if you are so inclined, please come enjoy a meal along with the beautiful musical stylings of Hope Dunbar & Emily Dunbar.

Here are Hope & Emily's Bios:
Hope Dunbar: Not much has changed at Hope Dunbar’s house out on the Nebraska plain. If you look out her window, you see the same thing you saw three years ago: the same infinite prairie and tantalizing horizon. Her husband still pastors at a nearby church; their teenage sons still live at home. But all of that is just one dimension in this singular artist’s world. Another one lives in her imagination, where through song she transforms the mundane into the magical.

We witnessed this alchemy four years ago, when Dunbar released Three Black Crows. She conceived its music during the hours when her husband and kids were at work and school, without any nearby singer/songwriter rounds or club dates or supportive community. When released in 2017, Three Black Crows inspired positive comparisons to Springsteen’s Nebraska. One critic cited her references to “dusty roads, endless fields and massive starry skies,” to which she adds layers of meaning through her “visceral authenticity and raw honesty.” American Roots host Craig Havighurst extolled her “incredible language and truth-telling.”

Dunbar’s emergence led to what she remembers now as “a frenzy of activity.” Her homebound days gave way to touring, interviews, radio appearances. Yet as this door opened, another one closed, much to her alarm. “I didn’t skyrocket to fame,” she says. “But I did rocket right into hitting a wall. Things got so overwhelming because the hustle became more important than the artistry. By the summer of 2018 I was thinking, ‘I’m not in love with music the way I was prior to my last record.’ I wasn’t expecting that and it was a little jarring.” Something had to change. So once the hoopla passed and she was able to come back home, Dunbar began looking hard at where she was and what had to be done. With help from a life coach, she found the right questions to ask and then looked for answers.

“I wound up on a new path of taking ownership of my musical journey,” she says. “I’d been saying yes to every voice giving me advice on what I should do. So I learned not to listen to those voices. Now I’m not going to do anything anybody tells me to do … unless I know I really want to.” With this she kindled the dormant spark that had inspired her to write in the first place.

So Dunbar began to compose again. New songs poured forth, which she brought to Nashville for her second album, Sweetheartland. With Zack Smith, one-half of the celebrated duo Smooth Hound Smith, and Jesse Thompson sharing production with her, she led a carefully selected group of Nashville musicians on a journey through stories lifted from everyday routine and secret dreams.

Brilliant lyrical snippets abound. “A gift card to a gasoline station is not a valentine,” she admonishes some dim bulb on “What Were You Thinking?”
“I don’t need a cage; I’ve forgotten how to run,” she mourns on “Dust.” Daring to hope for something beyond farmland, she sees the highway as “where the wife with a black eye places all of her chips” on “The Road Is” and insists “‘more’ ain’t a four-letter word” on the last track, “More.” Even her homage “John Prine” illuminates both his genius and her restless introspection: “I’m flipping through the pages of a waiting room magazine while the clock keeps on ticking like a pickaxe steadily chipping away at the vision of who I thought I could be.”

In its hope and resignation, its candor, craft and vast Midwestern Americana resonance, certainly in its insight and poetry, Sweetheartland echoes its predecessor. Yet Dunbar sees two crucial differences between the two albums. “On this record I wanted to bring all the raw material, the songs I’d written on my own, to Zack and Jesse and then riff on what they could be. Also, as a small-town preacher’s wife, I had been kind of tentative with my identity. It just felt unbecoming for me to express feminine, sexual power on a record. But I’ve always had a sense of rebellion, so this time I just decided to put that out there along with everything else.”

Even more important in something more ephemeral, hard to pin down but absolutely real. “I’m really proud of Three Black Crows,” she continues. “But it has the spirit of asking for permission, a feeling of tentativeness. My intention with Sweetheartland was to walk in and say, ‘I’m not asking your permission. I’m doing what I want to do. I am fully empowered and I’m choosing to make this record.’”

It would be wise for us to hear it too. Maybe we don’t live as remotely as Hope Dunbar — but all of us can draw from the wisdom and empathy honesty of Sweetheartland. Its message is both regional and, metaphorically at least, universal. In her words, “It’s important for me as a songwriter to express that small towns are great — provided there’s a road to take you away.”

Emily's Bio:
Emily Dunbar is an optimist. Through song she both questions and celebrates her place in the world, tells slice of life stories, and extols simple pleasures. Some stories are hers. Some are borrowed, but they are all personal and relatable. However, Dunbar’s optimism is not syrupy. Her songs depict deep struggles and hard choices, but ultimately profess that though we may not always get the life we think want, we can love, love, love the life we have.

New Reformation Press says of Emily’s debut album Catch It When You Can (produced by Tom Prasada Rao), “A little bit folk, a little bit country, all Americana, Dunbar’s songs are wonderful (in the many meanings of that term) evocations—and celebrations—of the everyday graces that inhere, for example, in the rootedness of place and family.”

You may know Emily from her solo work, contributing to the RealWomenRealSongs project writing and uploading a song per week in 2014 or playing in the band Star Belle Ukulele Trio. Emily has opened for nationally touring artists like Darrell Scott, Mark Erelli, Sweet Talk Radio, and Amy Speace in listening rooms and concert venues across Nebraska.

​Having grown up in suburban St. Louis, Dunbar now hails from Hastings, Nebraska (birthplace of Kool Aid, thankyouverymuch) where she makes music with her friends, hangs with her family, ponders the meaning of life, and frequently ventures out into the wide world.
"Emily Dunbar is a little bit country; she’s a little bit folk ‘n’ roll. She sings of married life and motherhood and the whimsical, poignant fantasies one has while perhaps contemplating doing the dishes piled up in the sink...Dunbar invites you into these reflections with her charming voice. And you might not realize it at first, but she’s singing your life." -- Ben Squires, Music Spectrum.
"A little bit folk, a little bit country, all Americana, Dunbar’s songs are wonderful (in the many meanings of that term) evocations—and celebrations—of the everyday graces that inhere, for example, in the rootedness of place and family." -- Korey Maas, New Reformation Press
In a world of snarkiness and cynicism, what if music were sweet and sincere? What if it actually made you smile? "Catch It When You Can" has that kind of low. Don't get me wrong, it's not shallow or sugary, it's just the sound of an artist who loves her life and knows her voice. Emily Dunbar has crafted an exceptionally strong debut here. The stories and characters she weaves into her songs are romantic but real. The lives they live are simple, and definately not easy, but there's a thread of hope througout... For fans of: Dixie Chicks, Nanci Griffith, Tim O'Brien and Darrell Scott." -- iTunes Review

Again, suggested donation at the door for Hope & Emily. is $20.00. All funds collected will go to the artist.