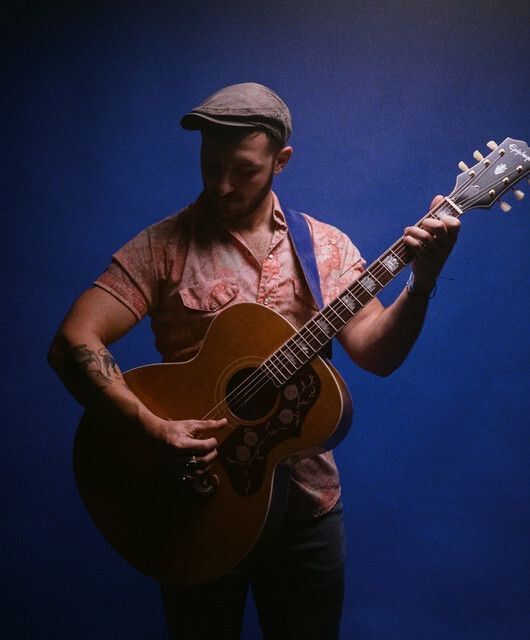 In partnership with BeNt Shadows House Conterts & Cindy McClellan, we are hosting a house concert at The Leadership Center featuring the ever talented Dustin Dale Gaspard/

A meal will be served from 6:30-7:30 p.m. and the house concert will take place from 7:30-9:30 p.m. Everything will take place in the Mather East. We will offer spaced out seating, both soft seating as well as tables & chairs. As with Cindy's House Concerts, it is BYOB if you'd like and a suggested donation of $20.00 p/p. All funds collected at the door, will go to the artist.

Starting at 6/6:30-ish, we'll be offering homemade dinner prepared by The Leadership Center team for $10-$15 p/p.The menu will be shared the week before. So if you are so inclined, please come enjoy a meal along with the beautiful musical stylings of Dustin Dale Gaspard.

Dustin Dale Gaspard hails from the rural southern community of Cow Island Louisiana, a landscape of mysterious rich marshland, ancient shrouding oak trees, and dream inducing nights/ days. The open pastures, whispering cane fields, and smothering earth tones offer him a creative canvas to color with the soundscape of his original music. His Atmospheric and cryptic tunes are influenced by the land that raised him. "There’s an alchemy to Dustin Dale Gaspard’s sound which will become more than perceptible once you hit play "- AnR Music FactorY

Cow Island, La. (January 2021)-
The humble mumbles of melody were heavy on Gaspard's heart ever since the passing of his grandfather in Oct. 2020. Now, his grandmother embarks on that same journey, and the stir for immortalizing their legacy through song could wait no longer. On a cold January night, Gaspard would begin humming the title of the record to the moonlit sky, and in the following days he would deal with his loss by planning an honorary album titled "Hoping Heaven Got A Kitchen".

Set to release Feb. 28th, 2022, this record will pay homage to the land that raised him, the sounds of the Cajun south, and the memory of his grandparents, Emily and Berton, who passed during quarantine. Gaspard takes listeners from the Cajun country kitchens, greased by maw's fryer, all the way to muddy marsh landscapes leading to his pawpaw's camp. The name "Hoping Heaven Got A Kitchen" comes from him knowing that if there is a place better, it'll need a kitchen for the two of them to do what they loved.

This will be Gaspard's first full band release, in strong contrast to both 2019's self-produced solo acoustic demo "Porcelain Prayer Tapes" and his 2020 folk quartet EP "In Callow Comfort." This 12 song album will feature all tunes written and arranged by Gaspard with the exception of vintage Swamp Pop covers of Van Broussard's 1968 hit "Feed The Flame" and local legend Rod Bernard's 1959 classic "This Should Go On Forever." All arrangements are heavily influenced by folk, roots, blues, soul and Cajun genres. The songs use instrumentation like upright bass, piano, slide guitar, fiddles, percussion and accordion. To give more credence to his Cajun heritage, twice Gaspard sings in his grandparents' native tongue of French, as was a wish of theirs ever since he was young.

Again, suggested donation at the door for Dustin Dale Gaspard is $20.00. All funds collected will go to the artist.